These font football kits are perfect for type nerds 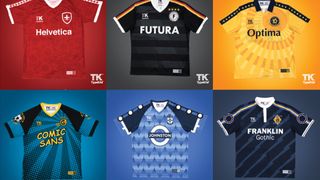 We’re not sure what the Venn diagram of football fans and typography enthusiasts looks like. But if you fall in the overlap between the two, this is the Kickstarter project for you.

Created by self-described football mad design professional Mark Jenkinson, TypeKits is a Kickstarter project that sees typefaces transformed into football shirts. Besides free fonts, what more could the typography obsessive in your life want?

In TypeKits, six famous typefaces and their designers are celebrated as they’re cleverly realised as football shirts. There are even a few parallels between the funny old game and type design thrown in for good measure. Check them out in the gallery below.

The mashup of football kits and the world of typography has already been featured in football magazine Four Four Two, despite not having yet reached its pledge goal.

Speaking about how the project came about, Jenkinson said: “I love footie and I love typefaces so one random day I just had the idea of ‘what if I mashed these two loves together?’ And so began my TypeKits journey.

“What was intended to just be a one off Helvetica jersey quickly started to spark new ideas that brought more parallels between football and design. The history, the men behind them and the passion people feel for them.”

The fonts in question include Helvetica, which uses its historic connection to Swiss design to become a red and white kit. It’s also emblazoned with the year 1957 in reference to the year it was made.

Any project about popular typefaces wouldn’t be complete without the infamous Comic Sans getting a look-in. And TypeKits doesn’t let us down. The use of the Millwall chant ‘no one likes us. We don’t care’ on the back of the shirt is clever touch, and the dotted pattern is a nice nod to its comic strip roots.

Other fonts in the collection include Futura, Optima, Franklin Gothic and Johnston Sans. And if football shirts are a bit much, you can also show your support for your favourite typeface with a scarf instead.

To back the project, head on over to the TypeKits Kickstarter page.