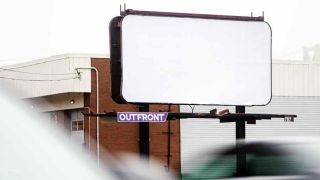 As much as the holidays are a time for family, you can’t ignore the endless ads in the run up to Christmas. So Wunder, an independent Canadian creative agency, decided to buy up $10,000 worth of advertising space and fill its with absolutely nothing but plain white space.

The self-promo campaign, called White Christmas, is across various mediums – including print, digital and radio – and offers respite from a deluge of in-your-face holiday advertising for the locals of Halifax, Nova Scotia. (For some ads that aren’t just plain white, see our great examples of traffic-stopping billboard advertising). What’s particularly interesting about this idea is that it comes from an agency that creates adverts for other people, so it’s definitely a new approach to self-promo.

What was the thinking behind it? Wunder creative director Stephen Flynn explains, “The first and most striking visual that came up in the concept phase was a giant blank white billboard…We started to think of it kinda like AdBlock but in real life.”

Getting the White Christmas campaign into physical spaces was easy, but taking it to the radio airwaves was more of a challenge. The local radio station wouldn’t allow the agency to air ‘silence’ so they had to do with a long pause (that’s not really that long). You can watch the campaign come to life and listen to the radio spot in the video below.

With no colour, no slogans and no message, The White Christmas campaign could easily have gone wrong. But the timely release of the ads, coupled with the title – White Christmas – and the plain white colour (which suggests snow) combine for a success story.

But, it seems another factor might well have had a part to play. “People seem to be really drawn to the absurdity of someone spending money to run a completely blank ad, and they appreciate the bold move,” says Flynn. We are not so 100 per cent convinced, but this case, it definitely works.