Anatomy of a Logo: The Star Wars Logo Evolution

This is referencing a super detailed blog post by Alex Jay, that covers every variation of the Star Wars emblem, badge, lettering, and logos.

I had no idea so many variations were used prior to the famous final logo designed by Suzi Rice.

I’m not going to expand or even attempt to belittle Alex’s post, except to very briefly summarise the key stages in the Star Wars logo design evolution.

For the full detailed commentary, with lots of photos visit Alex’s post a breathtaking examination of the Star Wars branding:

Anatomy of a Logo: The Star Wars

My plan is that I’m going to pick one image from Alex’s post that is representative of each the logos iteration. This post is brief, but hopefully shows you a quick look at how the logo evolved.

During the film’s pre-production, a decal (above) was produced. In the first Official Star Wars Fan Club newsletter, reprinted in the Star Wars Scrapbook (Chronicle Books, 1991), there was an explanation about the decal by Ralph McQuarrie, who did the art.

The decal designed by Ralph McQuarrie was dropped, and a new version was used for the coporate letterhead, which was designed by Joe Johnston.

Notice that the figure & sun illustration, from Ralphs first decal, was still used with the new lettering designed by Joe, for the letterhead.

Below: Banner with the revised logo with a super young Mark Hamill at the 1976 San Diego Comic Con. 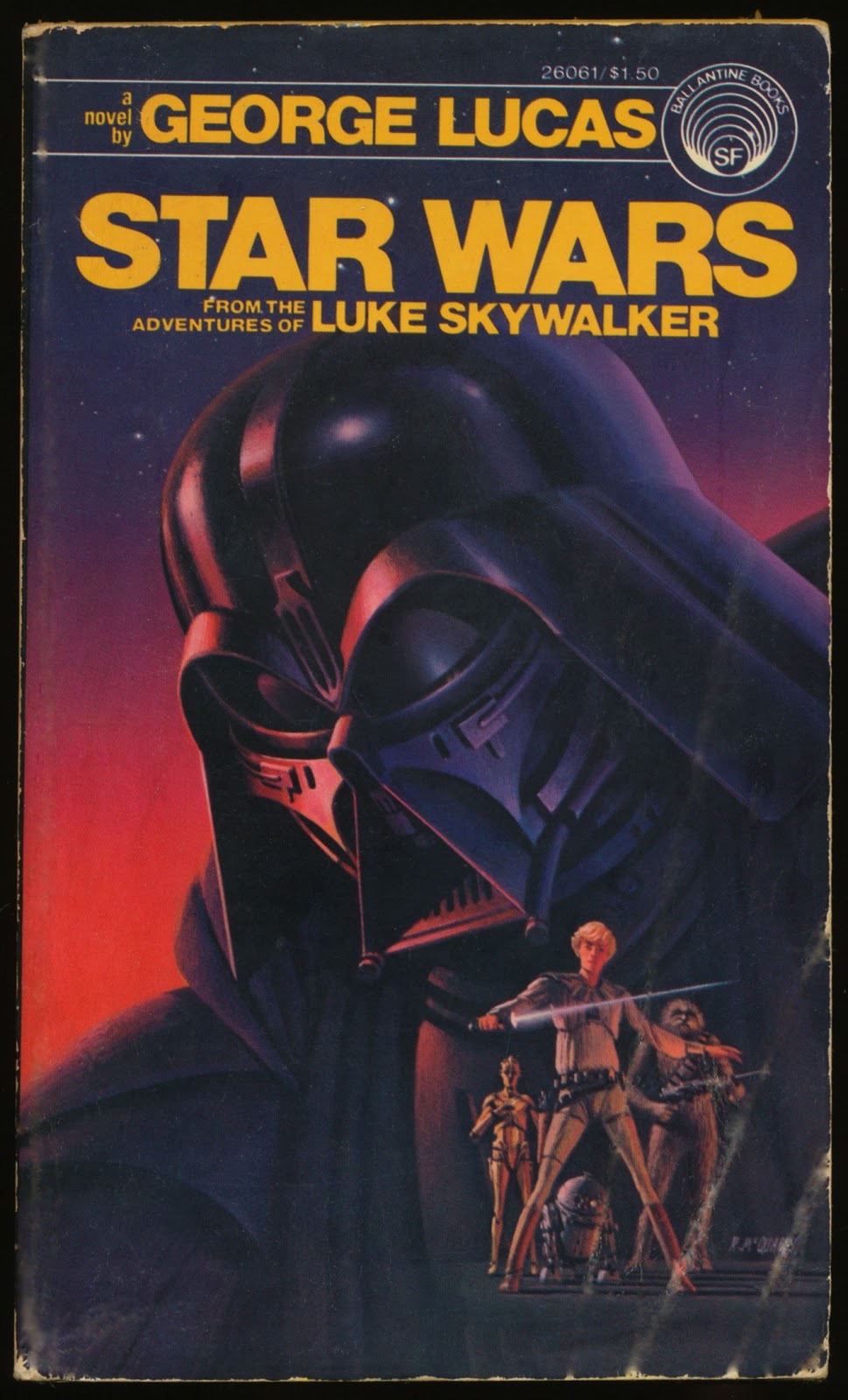 Yes it’s true! Helvetica even made it into a Star Wars logo.

In December 1976, a novelization of Lucas’s screenplay, ghost-written by Alan Dean Foster, was published by Ballantine Books. The cover art was by McQuarrie and the cover fonts are from the Helvetica family. 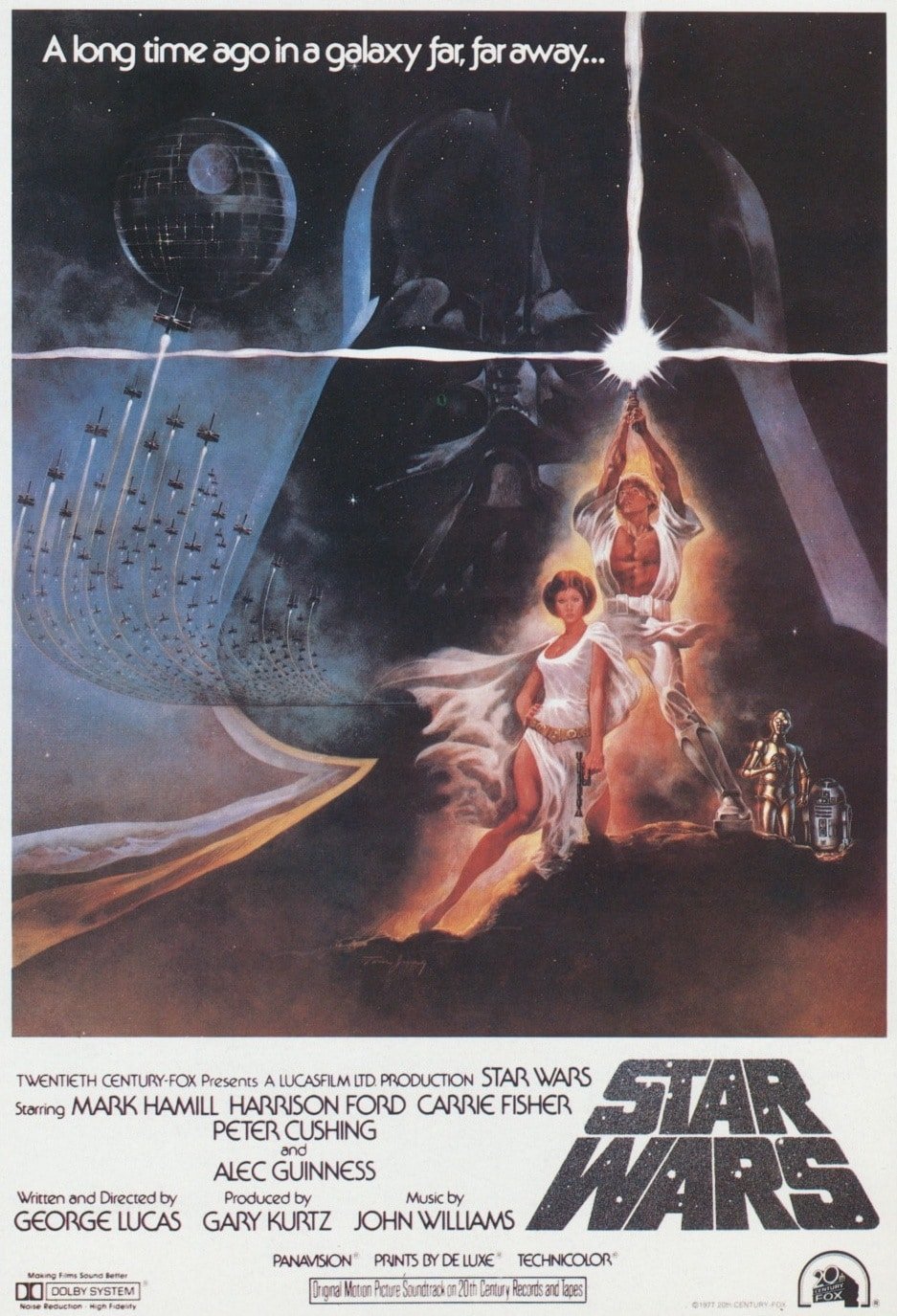 The 4th variation of the Star Wars logo was designed by Dan Perri, which was meant to be used for the opening sequence, but it was not used.

Instead, it was used for various print posters and advertisements.

This is where we start to see the more familiar look of the modern day Star Wars logo, but it took 2 more designers to end up with the final Star Wars logo.

This is where we get to the more familiar version of the Star Wars logo, and this version was designed by Suzi Race.

George Lucas turned to Suzi to design the logo, which is documented in the Star Wars Poster Book (Chronicle Books, 2005):

“…Though the poster contained no painted imagery, it did introduce a new logo to the campaign, one that had been designed originally for the cover of a Fox brochure sent to theater owners….Suzy Rice, who had just been hired as an art director, remembers the job well. She recalls that the design directive given by Lucas was that the logo should look “very fascist.”

“I’d been reading a book the night before the meeting with George Lucas,” she says, “a book about German type design and the historical origins of some of the popular typefaces used today—how they developed into what we see and use in the present.” After Lucas described the kind of visual element he was seeking, “I returned to the office and used what I reckoned to be the most ‘fascist’ typeface I could think of: Helvetica Black.”

Inspired by the typeface, Rice developed a hand-drawn logo that translated well to the poster campaign, and ultimately to the movie itself. “I did have the screen in mind when I drew the logo originally,” explains Rice, who “stacked and squared” the words to better fit the brochure cover. It was an aesthetic choice that has lasted nearly three decades.

The now-familiar “S” ligature extensions that Rice drew were modified a bit after Lucas “remarked that it read like ‘Tar Wars,’” says Rice. “He asked me to make some revisions on the leading and concluding ‘S’. 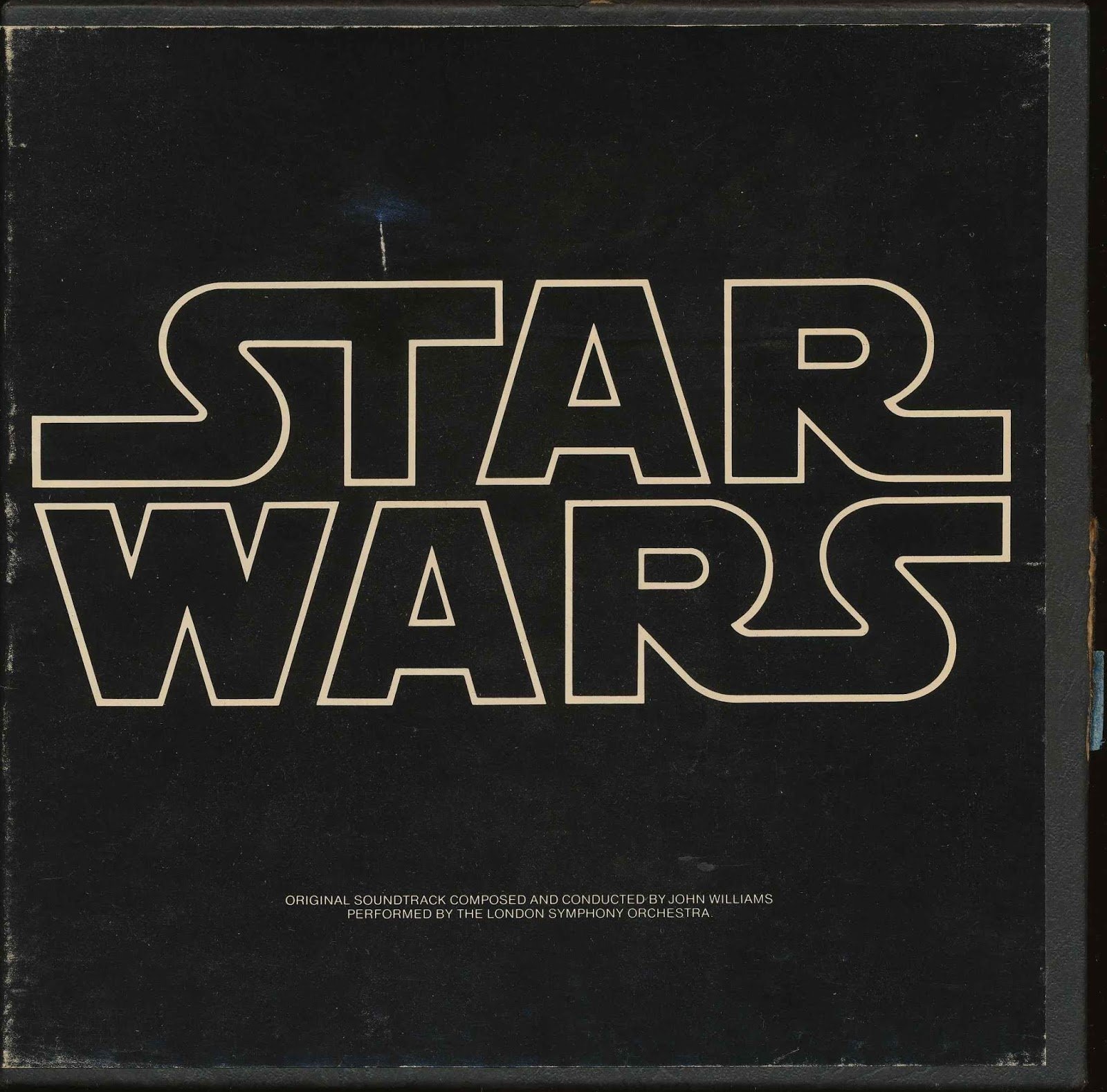 The most noticeable change being to the W, along with some other lettering tweaks. 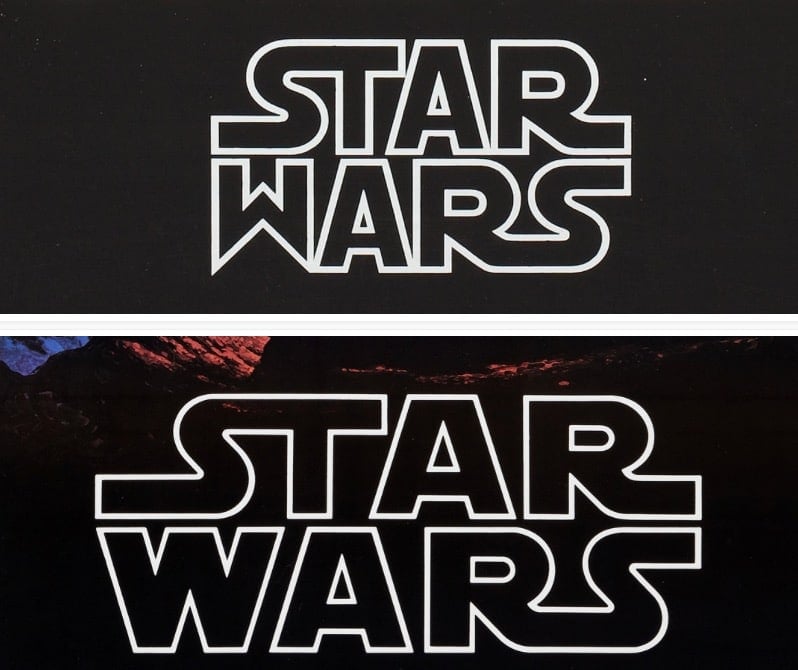 So there we sort of have it.

I’ve literally condensed down Alex jay’s comprehensive breakdown into just a few images, but you really must visit Alex’s thorough post to see all many images and explanations for each of the versions.

But today is the day I first realised that Helvetica was used, in a very small part, as a Star Wars logo.

Hire a Freelance Logo Designer in the UK

In the Latin world there have been many endeavours to anatomize the shapes of letters, from Albrecht Dürer’s geometry of capitals in the 16th century to Stephen Coles’s excellent book, The Anatomy of Type, as recently as 2012.

While Greek uppercase, at least as far as fonts are concerned, can be analysed on the same basis as Latin, the lowercase has often been regarded as somewhat ‘exotic’. Thus Western type designers and scholars have shied away from anatomical terms in favour of labelling entire models after their creators without significant analysis of their construction and aesthetic relationships.

There are many professions that need terminology for everyday purposes. We can identify at least these: typeface designers, typographic designers, calligraphers, teachers of handwriting for children, design teachers, printers, graphic designers, palaeographers, etc. The difficulty has been getting all the modern groups to agree to use a standard set of terms. Almost all printing terms and glossaries of typographic terms in Greek nowadays have been established by non-Greeks, took place outside of Greece, and have been simply translated into Greek language.*

In the 1990s there were two significant conferences about Greek typography: in 1992 the “DIDOT Program” in Thessaloniki, and in 1995 “Greek letters: from tablets to pixels” in Athens. In both conferences there were attempts to establish a typographic glossary in Greek. The latter gave us, in the appendix of the proceedings publication, a “glossary of terms” with the following note of caution:

“It must be borne in mind that typographic terms have been introduced and used by practitioners with little if any theoretical background. As a consequence the terms that have survived are often of unknown origin (as is ‘serif’, say) and if the origin is known the evolution of the term in use bears little resemblance to its root (as with ‘punch’). One might be tempted to introduce modern terminology that is consistent and accurate. However, the three dimensional character has been supplanted by the two dimensional pixelography. Many terms survive, however, and we list a few that are encountered in the text.”

Around 2006 there was a concerted effort to agree on terminology, especially on the internet forum Hegrade. A significant number of terms commonly used in English were presented alongside suggestions for Greek terms. The discussion petered out, with, for example, four terms for serif** — some everyday, some arcane — with no agreement as to which was to be recommended. This is the situation that remains today.

* The x-height has translated in Greek (in half of the examples) as the kappa-height. Of course that isn’t a very safe assumption if you see curved and overshooting kappas, but then again, ‘x’ can do that too.  🙂

** We have ended up nominating six words for serifs: four from the Hegrade forum discussion in 2006 and two bonuses:

• serif = ακρέμων (akrémon: tip of the branch, formal form of the above)

Greek is an alphabetic European script that, even if it is not written, always looks somewhat familiar especially in its typographic form. Nevertheless, to design it and typeset it correctly one needs to be familiar with its “peculiarity” compared to Latin. The Greek question mark is the Latin semicolon, the Greek semicolon is the Latin middle dot that is positioned a bit higher. The Greek lowercase always has accents and sometimes many accents and breath marks — if we set our text in Polytonic (not the official written system since 1982). But when written in capital letters, none of the accents and breath marks survive except for the dieresis. We prefer «French style quotes» and prefer our accents at the start of the sentence hanging. We even have our own ampersand, which is actually a conjunction of the word και (and), and it also has an uppercase form (there are two Unicode values). Then again, there is no keyboard layout to support it, so if you want to use it, then drag it or paste it from the character/glyph panel — if the font contains it. Even more bizarre is the Drachma symbol (Greek currency prior to the Euro) that never had a typographic form: the three consonants (δρχ) of the word were written before the number. If you are reminiscing those days when Greece had its own currency and you’d like to type it with style, our own Alverata has a few of them. 🙂

And lastly, what is needed: monotonic or polytonic Greek? In 2017 Google commissioned proposals for the standardisation of the Greek character set by defining the usage of Greek rather than simply following Unicode codepages. The sets have a specific structure and hierarchy:

• Expert — Small caps for Core and Plus sets, superscript letters