Digital asset management (DAM) platform Cloudinary has announced a new integration with Shutterstock that gives users direct access to their Shutterstock accounts from within the Cloudinary DAM.

Managing and organizing visual content can be a constant battle for creative teams, especially given the speed and scale of today’s businesses. Those who use both Shutterstock and Cloudinary will benefit from the increased efficiency of the integration, which reduces down the time and effort it takes to move visual content between platforms.

Pantone Announces its Color of 2020

Each year, at this time, Pantone nominates a color — or colors, in the case of 2016 — to represent humanity’s hopes and aspirations for the coming year.

At least, that is what its PR department sends out. In reality, it’s a rather obvious — if highly effective — marketing gimmick to keep the print-design company relevant to design news year-on-year. It’s an arbitrary bit of self-promotion, that does an excellent job of reinforcing Pantone’s position as an authority on color.

This year, Pantone has selected Pantone 19-4052, or “Classic Blue” to give it its colloquial name. It’s described by Pantone as: “Instilling calm, confidence, and connection, this enduring blue hue highlights our desire for a dependable and stable foundation on which to build as we cross the threshold into a new era.” 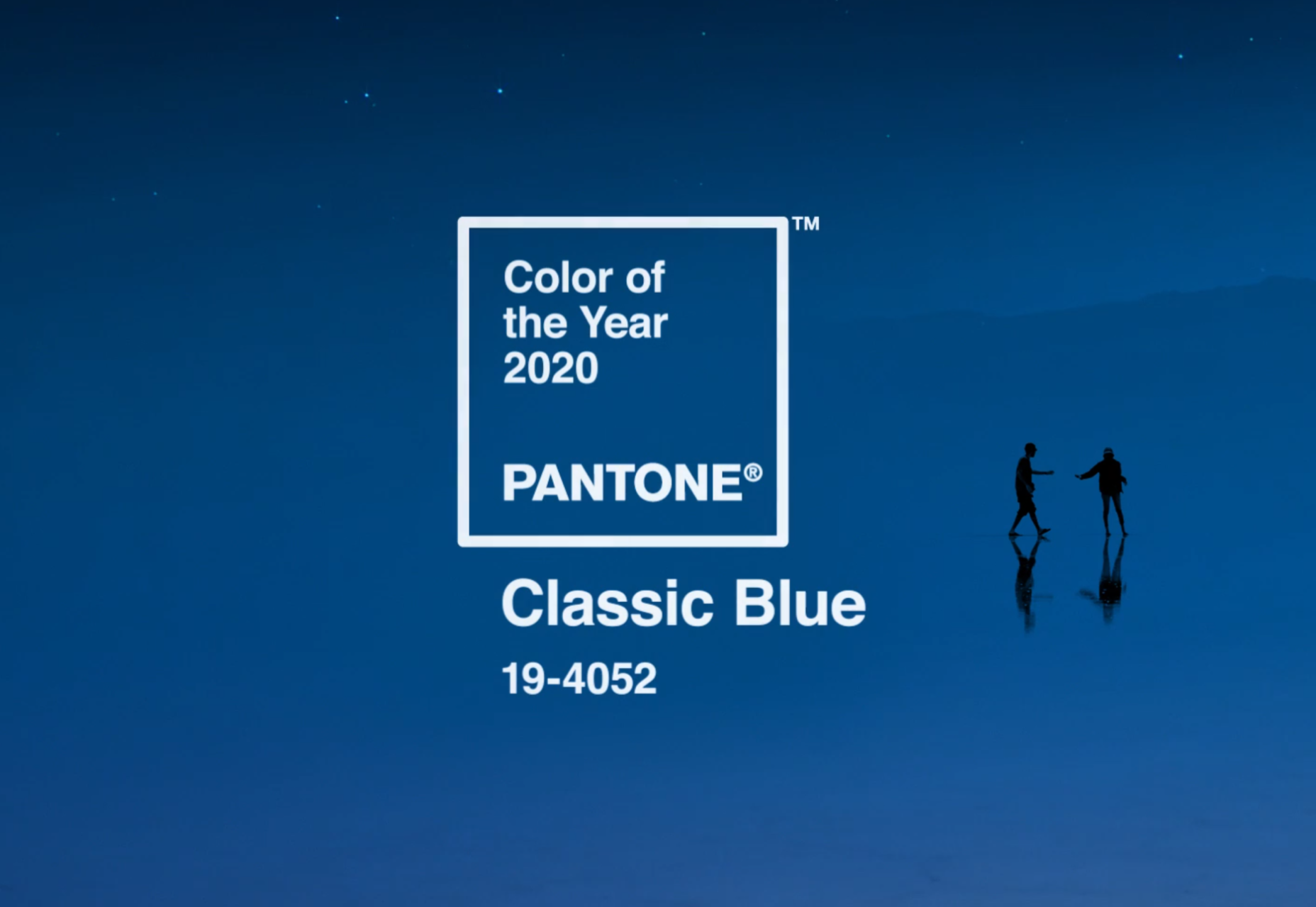 Critically speaking, it’s one of the most mis-judged decisions in the short history of this promotion, and significantly mis-reads the zeitgeist.

At a time when the climate is approaching — or may have passed — irreversible breakdown; when global political debate is moving out of our institutions and onto the streets; when the baby-boomer generation is slowly losing its grip on the reins, and millennials are realizing they’ve reached middle-age; Classic Blue is a color that harks back to a time when we hid our head in the sand and pretended everything was fine. It’s the color of the pre-2008 crash, the color of Facebook pre-privacy scandal, the brand color of your parents’ bank. Classic Blue is about as 2020 as Helvetica.

(There’s only one color that effectively represents 2020, and that’s Cyberpunk Pink, a neon hue that is both retro and forward-looking, cross-cultural, irreverent, and even better in dark mode.)

Deep work is a concept created by Georgetown Professor Cal Newport, who defines it as: “activities performed in a state of distraction-free concentration that push your cognitive capabilities to their limits”.

Deep work is where you produce your best work. It decides company profit, feeds employee purpose and drives society forward. But the current state of knowledge work has made deep work virtually impossible.

Dewo is our attempt to fix it – to remove the distractions that keep you from focusing and identify the conditions for doing quality work. It’s your intelligent personal assistant for doing more of the work that matters.

The whole tool is driven by the Memory app, which captures everything you do across web and desktop. It’s the same app we use in Timely, our automatic time tracking tool used by over 5,000 companies across 130 countries. We care very deeply about the privacy of our user’s data, and have outlined exactly how we use it here.

Dewo’s machine learning then uses this data to analyze your productive patterns and make active suggestions to helps you work smarter. Each Dewo user effectively gets their own Deep Work Algorithm, trained using their data alone — which means Dewo’s outputs are tailored to every individual’s specific ways of working.

Not at all! The current version of Dewo is completely free to use. While we may offer premium features far in the future, for now it’s freely accessible to everyone.

For now, we’re inviting people into the beta in batches. Just sign up using the button above to save your spot in the queue! If you’re super keen to get in, you can jump the queue by inviting friends or colleagues to sign up as well. The more people you invite, the further forward you will move in the queue!

Adobe has announced the general availability of real-time customer data platform (CDP) features, new governance capabilities and new cross-channel personalization methods. These updates to Adobe Experience Platform will allow users to pull together customer data from across the enterprise in real-time.

Why we should care

Delivering a consistent customer experience across all touchpoints and interactions can be a challenging feat for marketers working with fragmented data and complicated governance structures. Marketers know that they need to establish a single view of each customer, but many brands struggle to leverage that view to deliver advantageous experiences.

“Customer experience is the new battleground for business. Brands must close the gap between the customer, channels they live and the experience they expect,” said Suresh Vittal, vice president of Adobe Experience Cloud. “Adobe Experience Platform is built to give brands the ability to have a single view of each customer, without the pain of decoding complex interactions across digital and physical touchpoints.”

Additional updates to the Adobe Experience Platform
include: Adobe has announced a new app in Photoshop Camera. As its name implies, Camera leverages Adobe’s image processing chops to apply effects to photos in real time, ostensibly circumventing the need to use the company’s other software to add them after the fact.

There are roughly a billion other apps that already do stuff like this, but Adobe’s take is apparently built on the company’s Sensei AI platform and can recognize a bunch of Photoshop-type stuff like dynamic range and tonality in real time to make better adjustments. The app also saves a copy of the photo without any adjustments applied, so you don’t have to worry about taking multiple photos of a single scene.

You can sign up for early access to the app now at photoshopcamera.com. Adobe says limited slots are available, so you might not make it in. If you sign up and don’t get access, you’ll get an email when the app publicly hits the Play Store.

Our machine performed the target computation in 200 seconds, and from measurements in our experiment we determined that it would take the world’s fastest supercomputer 10,000 years to produce a similar output.

IBM has pushed back on Google’s claim, arguing that their classical supercomputer can solve the same problem in far less than 10,000 years.

We argue that an ideal simulation of the same task can be performed on a classical system in 2.5 days and with far greater fidelity. This is in fact a conservative, worst-case estimate, and we expect that with additional refinements the classical cost of the simulation can be further reduced.

Because the original meaning of the term “quantum supremacy,” as proposed by John Preskill in 2012, was to describe the point where quantum computers can do things that classical computers can’t, this threshold has not been met.

One of the fears of quantum supremacy being achieved is that quantum computing could be used to easily crack the encryption currently used anywhere you use a password or to keep communications private, although it seems like we still have some time before this happens.

“The problem their machine solves with astounding speed has been very carefully chosen just for the purpose of demonstrating the quantum computer’s superiority,” Preskill says. It’s unclear how long it will take quantum computers to become commercially useful; breaking encryption — a theorized use for the technology — remains a distant hope. “That’s still many years out,” says Jonathan Dowling, a professor at Louisiana State University. With the increasing scrutiny around the privacy of users, Google has announced some new features to give us all some additional peace of mind. Updates to Maps, YouTube, and Assistant will make it easier to control how much of your data the company has access to, and Password Checkup will help you ensure everything stays secure.

With Incognito mode in Maps, you’re now able to hide your movements and searches from Google for the duration of the session. You’ll lose all of your personalized content and recommendations, but it’s easy to switch back when you need to. To turn Incognito mode on, tap your profile icon and select it from the options. It’s coming to Android later this month and will eventually land on iOS too.

The ability to auto-delete your web activity and location history was rolled out by Google in the summer, and now YouTube is getting the same feature. There will be three choices for how long YouTube stores your history: 3 months, 18 months, or until you delete it. You can still turn off your history altogether if you’d prefer. You can edit these settings on the web here. Google will also be bringing auto-deletion to other products in the future.

After an update to the Assistant that will start arriving on phones next week, it’ll be possible to simply ask Google about your privacy settings and change them with your voice. To get some information, you’ll be able to say “Hey Google, how do you keep my data safe?” And if you want to delete something you asked, that’s easy — “Hey Google, delete the last thing I said to you.” This will also work for the past week, e.g. “delete everything I said to you last week.” Anything longer than that and you’ll be sent to your Assistant settings with even more granular controls.

Finally, Password Checkup will help you choose a more secure password when you’re using something a little bit too weak or generic, and it’ll also alert you when one of your accounts has potentially been compromised. If you’re using the same password for multiple services — something that many people are likely guilty of — that will also be pointed out to you. Head to passwords.google.com to see if your saved passwords need improving. The Password Checkup extension Google made available earlier this year will be built into Chrome in a future update, too, so it’ll stay on top of your security at all times without you needing to install anything extra.

The Association of National Advertisers (ANA) is launching Measurement for Marketers (MFM), a new division that aims to level the measurement playing field in the ad space. The announcement was made by ANA’s CEO Bob Liodice at the 2019 ANA Data & Measurement Conference this week.

Why we should care

With the digital industry surging toward increased transparency and ad safety initiatives, ANA is taking a natural step to support it by making efforts to keep measurement standards in check. For advertisers and marketers, this move could pave the way for a sanctioned baseline of measurement standards with resources to enable a cleaner ad ecosystem.

According to Liodice, the new division was created to drive cohesion across ad measurement standards and hold the industry accountable by delivering measurement-focused products and services to ANA members. Additionally, it aims to put marketers at the center, providing resources to enable thoughtful decision-making as marketers and advertisers direct digital growth strategies.

“This highly ambitious and historic action by the ANA puts the marketer’s agenda at the center of industry measurement,” Liodice said. “In the past the ANA and its members have relied heavily on joint trade association initiatives and on agencies and media sellers to drive the measurement agenda, but the missing piece has been the lack of dedicated ANA resources to get behind initiatives. As a result, the voice of the advertiser has been inconsistent.”