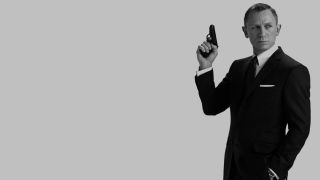 Last night, fans of James Bond were finally put out of their misery as the long-awaited title of the next film was revealed. No Time To Die will see Daniel Craig play 007 for the fifth and final time in April 2020.

Released alongside the film’s official title was its new black and white logo – which, with its retro-style, all caps typeface, absolutely oozes class. It was created by designer Tom Brooks, the man also responsible for the beautiful Spectre logo (and someone who certainly doesn’t need this guide to logo design).

The title animation, created by the team at Empire Design, opens with the classic Bond walking side-on into shot. But instead of turning to face the camera with a gun, he fades into the background of the type design like a spy in the shadows, as the camera slowly pans out to reveal all the elements of the typeface coming together. Finally, the iconic 007 logo appears in a beautiful gold, which offsets the whole design perfectly.

The craft and talent that has gone into this is clear – something being recognised by many on Twitter:

I’m deeply in love with absolutely everything about this. 70s style logo! Maybe a subtle Man With the Golden Gun reference? All ? of ? it! #Bond25 #NoTimeToDie https://t.co/zLWf3gG6L5August 20, 2019

If there was ever a design that said Bond, this is it. The whole treatment is elegant, classy and sophisticated, with a retro feel that gives that edge Bond is so well known for. Here’s hoping the quality of logo design and title sequence has set the bar for the film itself.