When you’re looking at a jacket, sofa or something else, the first thing you look at is COLOR.

You either attracted to it or it repels you so, think of the color that your brand has.

That’s why, I pay closer attention to color choices when it comes to branding. It matters a lot and has cognitive implications on your customers.

IMPORTANT: The right color palette will evoke the right emotions and build positive associations with your brand!

Below, I’ve listed a few screenshots from the color discovery that is a part of a branding strategy:

In my work, I don’t simply rely on my personal judgement, but rather I prefer to supplement it with a cognitive psychology principles for a maximum impact.

To develop a color palette that supports many design goals, you’ll need to know which colors attract the eye more than others.

Take a look at this ‘Visual salience of colors chart’ 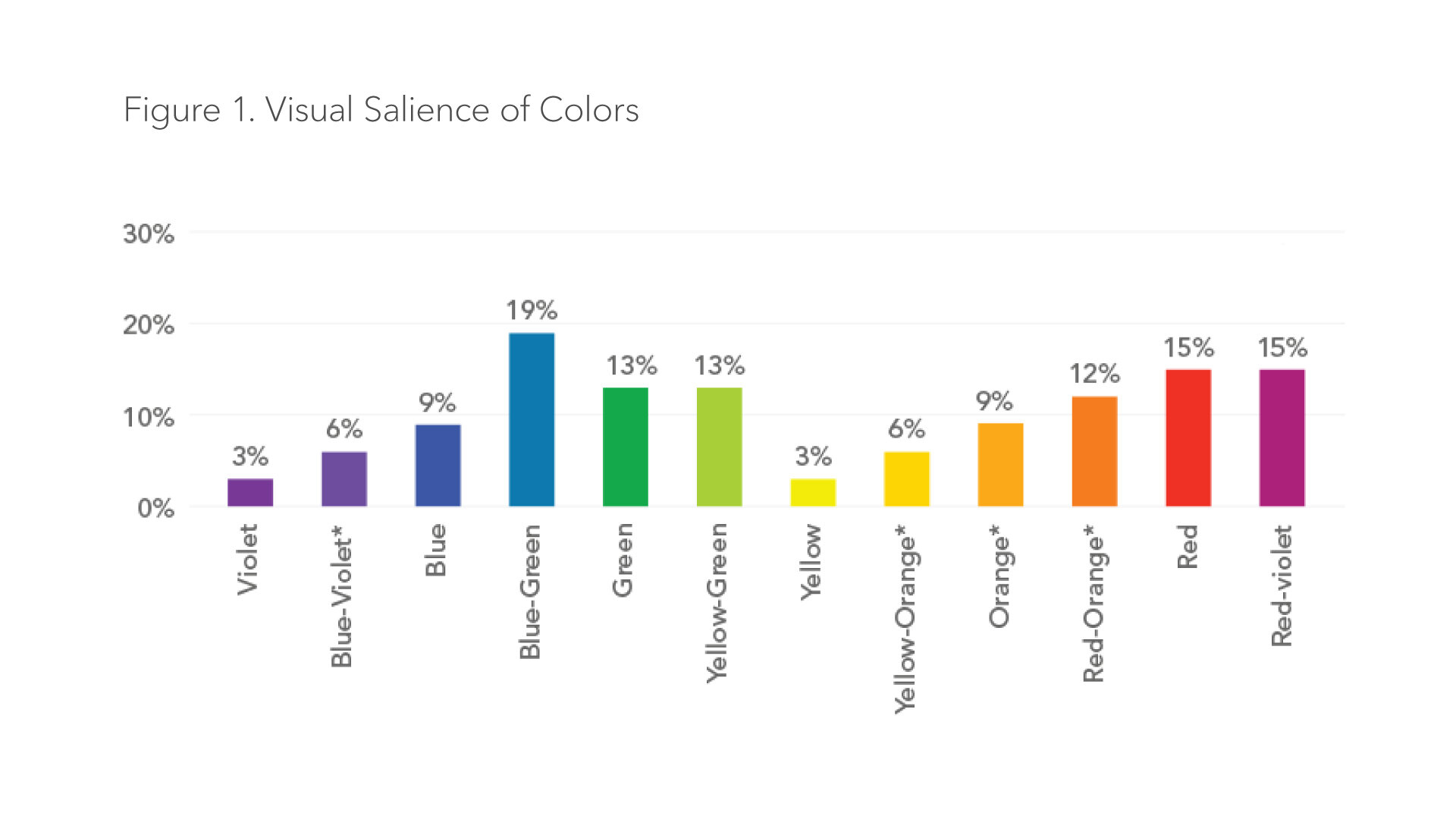 Visual salience of colors chart explains how your brand color stacks up against other dominant (salient) colors. It can also help you pick the color tint that will draw more attention to your logo/identity,rather than your competitors.

It’s advised to stick to only 1 primary salient color to avoid a.k.a. ’Las Vegas’ strip design gutter where everything seems important and calling for your attention.

Another important factor to be aware of – Arousal level.

At the end of the discovery, I give my recommendations on the best color variations as well as explaining the strengths and weaknesses of each color option. One of my principles is I never push clients to certain options because I believe that my job as a consultant is to give recommendations and then the company should choose what they feel would fit their needs better. That’s how relationships are built.

If you need help in solidifying your brand as well as establishing a bold visual language, feel free to get in touch.

Thank you for reading! 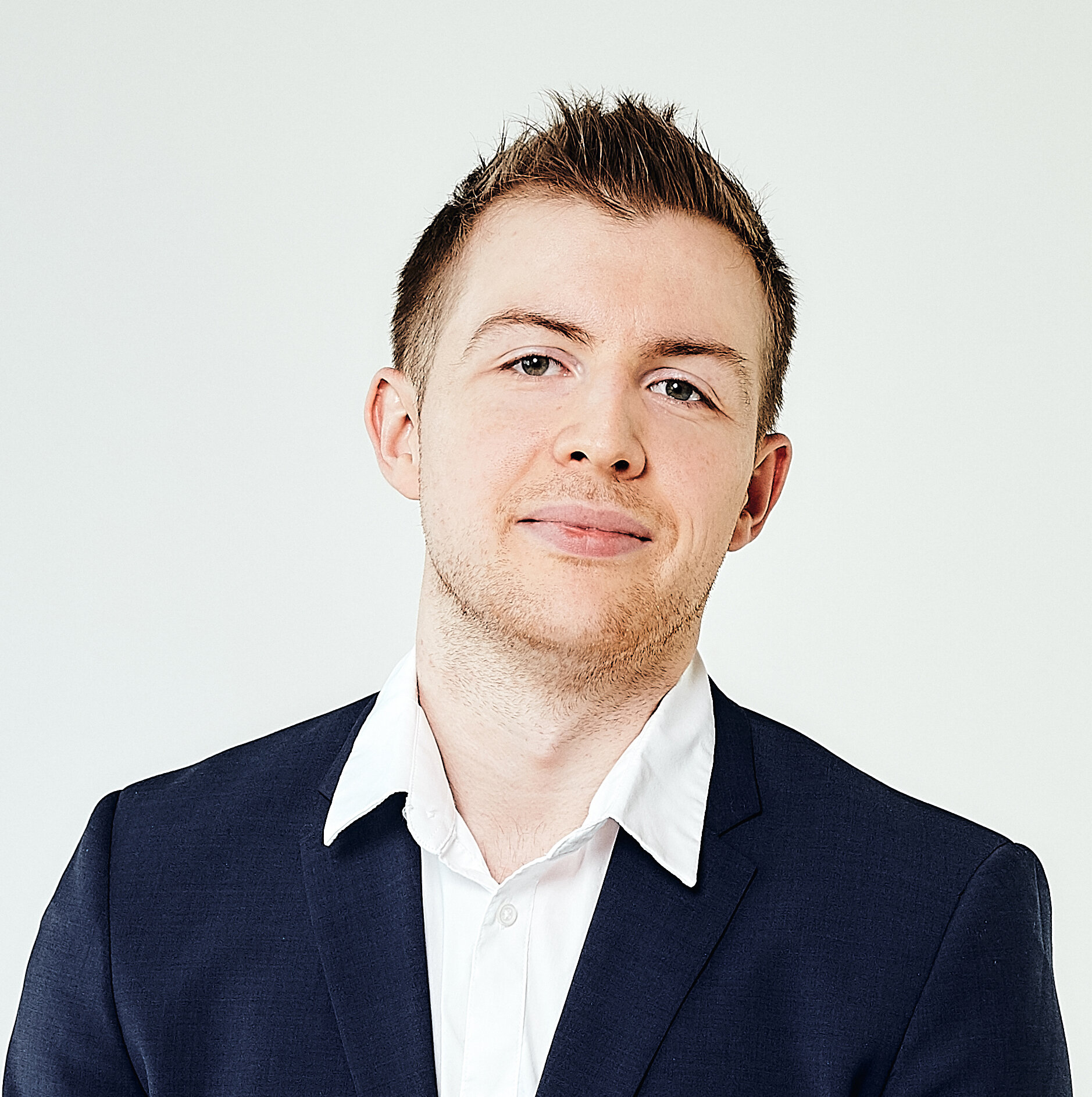 Alex Gilev is a UX/Brand consultant with a background in behavioral psychology, neuroscience, who helps SaaS companies to large Fortune 500 innovate in UX to maximize their competitive advantage.

Being an expert in interaction designing won’t be enough for a product designer.

Designing the interaction for a crowd investing platform quit easy for an intermediate skilled designer. The prototype would be having a project list page with features such as search, sort and filter, project detailed page with maximum information available to the project and a so-called CTA button ‘INVEST NOW’.

Is this enough for a crowd investment platform?

The answer could be yes, in terms of interaction design.

But will anybody who visits the platform make an investment?

Certainly no. Asking somebody to make an investment is quite complicated. Few or no people will give you money especially with the prospect of return. The investment itself has a lot of risks tagged with. Also, a new platform with less amount of recognition will ever able to make it.

So, there are a lot more things to be worked which are beyond interaction design. There should be a connection built, a trust built, a brand built.

People like what others like. Social proof as most common thing these days. Showing proof to a user that ‘the society like it, so you may too’ is called as social proof. Ratings, reviews and testimonials are the ultimate examples for social proof.

Users buy a product which has a good rating/review by a group of people. This will make more trust and credibility about the product.

As ratings, reviews and testimonials are everywhere nowadays, just taking this method will not be enough. This might seem to be fake for the users if we have less number of ratings/reviews. For an effective result, get a huge number of the same by motivating the users to provide.

People are influenced by others who’re well known. If people see a review/feedback from a well-known person or media, they will have more trust. Expert’s recommendation, celebrity’s review and press release articles are a few examples of authority.

This kind of reviews should not look like a paid shout out to the users. The more natural the more trust it creates.

People give something if they get something. People these days are afraid to share their personal data. Asking a visitor to sign up on your website is quite a lot difficult if they didn’t trust us. Offering something good to the users before asking something.

Offering free books, reports and rewards are some examples for reciprocation.

People make rational choices based on how they perceive.

Ex: Consider the customers tend to choose the SMALL option available(hence it is cheaper) and you like to promote the LARGE. you probably have to add another option which is slightly lesser than the LARGE.

People confuse to make a decision if they have many options. If users see a huge amount of choices to choose, they will have a paradox to decide. Having less number of choices helps them choose quickly and helps us avoid dropouts. Recommending one or few choices for the users will help it more to make a decision.

People like variable rewards. Rewarding users in fixed/variable intervals will motivate to continue or do more. Offering bonuses, coupons and rewards often to the users would motivate them. Gamified engagement works more effectively.

All these psychologies can’t be used in every single project you work on. These should be taken wisely based on the contexts, target users and nature of the product. Sometimes, overusing these methods will create an unethical dark pattern, which is feared to turn the product to failure. When you keep mental models in your mind while designing your product, you will be able to successfully induce the user to make an action.

How Uber uses psychology to perfect their customer experience

I think Uber is just very different; there’s no model to copy.

Available in 600 cities spread across 65 countries with more than 75 million users, Uber has become the default transport choice for many.

The scale and speed of adoption have been incredible, and Uber cites its unique business model and experience as the drivers.

So what are the most significant issues customers have with Uber? And how has Uber used science to fix them?

Imagine you’re out at 2 am on a winter night, waiting for your Uber while shivering on the side of a dark street in a new town. Or you’re late for an important meeting that you might just make if your Uber is on time.

In these high-pressure situations, your perception of time is warped. Every second takes a minute, every minute takes an hour.

Not only that, but people will use this warped wait time to judge their entire customer experience. Why? It’s all down to a psychological principle called the Peak-end Rule.

The science behind an unforgettable customer experience

The Peak-end Rule says that people judge an experience based on how they felt at its peak and its end, not the average of every moment of the experience. And that’s true whether the experience was good or bad.

For brands, this means customers will remember their whole experience based on only two moments — the best (or worst) part of their experience, and the end.

Because wait times are the key to a great customer experience, Uber has spent countless hours addressing this pain point.

“People dread idleness, yet they need a reason to be busy.”

Recent studies into psychology, happiness, and customer experience have uncovered a principle called “Idleness Aversion”. It states that people are happier when they are busier, even if they’re forced to be busy.

How to apply Idleness Aversion

To keep people busy, give them information to engage with — animation, gamification, and visuals are ideal.

In the example from Uber below, they use an animation that keeps you entertained and informed while you wait for your ride.

“When customers are separated from the people and the processes that create value for them, they come away feeling like less effort went into the service.

Operational Transparency is the deliberate inclusion of windows into your company’s operations, so customers can see the effort going into their experience.

According to recent research, Operational Transparency causes customers to value your product more highly and can even make people happier.

How to apply Operational Transparency

To keep people informed, make key information available, and help them understand where this information came from.

In the example from Uber Pool below, they provide information on how arrival times are calculated. It provides customers transparency but doesn’t overwhelm a non-technical audience with too many details.

The Goal Gradient effect states that people are more motivated by how much is left to reach their target, rather than how far they have come.

And as people get closer to a reward, they speed up their behavior to get to their goal faster.

How to apply the Goal Gradient Effect

Think of the Goal Gradient Effect as a virtual finish line. The closer customers get to winning, the more encouraged they become.

You’ll often see the Goal Gradient Effect in UX elements like progress bars and profile completion — users are encouraged to complete a task by achieving objectives.

Uber applies this principle by illustrating what’s happening behind the scenes while customers are waiting. They explain each step in the process, making customers feel they are making continuous progress toward their goal.

There’s no doubt that a large part of Uber’s revenue comes from optimizing their experience using science. When an experiment was run with Uber Pool that applied Idleness Aversion, Operational Transparency, and the Goal Gradient Effect, the results were impressive:

“The Express POOL team tested these ideas in an A/B experiment and observed an 11 percent reduction in the post-request cancellation rate.”

If you want to apply these principles to your brand, a testing mentality is critical. You have to be willing to test the application of the same principle in hundreds of different ways before discovering the best solution.

This experimentation mentality comes from the top down at Uber. As founder Travis Kalanick says:

“I wake up in the morning with a list of problems, and I go solve them.”