Off the grid with Signalnoise

Step into the neon nostalgic universe of the legendary James White — AKA Signalnoise. This digital artist has been gracing us with his epic 80s-inspired artwork since leaving agency life in 2010. Today James takes us back to his humble beginnings, shares what’s new with Signalnoise, and lends some powerful advice to all creatives on the hunt for their voice. 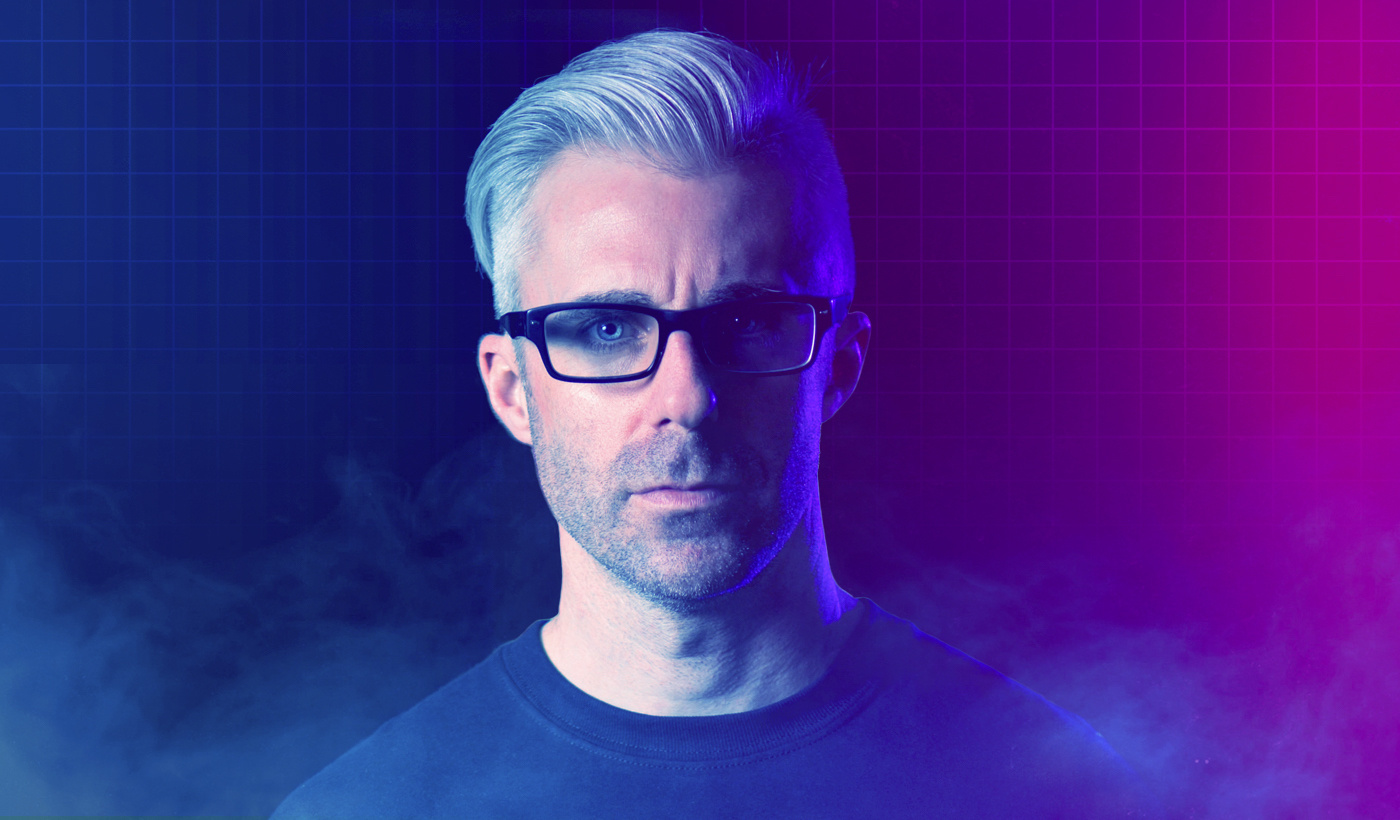 Tell us about yourself and how you got started in design.

I’ve been drawing ever since I could hold a pencil at the age of four, back in 1981. All through school I never stopped illustrating my favorite cartoon characters and superheroes, and upon graduation in 1995, I managed to get enrolled in a one-year graphic design course at a local community college. That’s where I was introduced to Photoshop and Illustrator when, up until that point, I’d only been using colored pencils and markers to make my stuff. Needless to say, that’s when everything changed.

Following graphic design, I took a two-year course called Interactive Tech which taught me some new tools — the most important of which being Macromedia Flash at the time. In 1998, right out of school, I was scooped up into the web industry and worked with local agencies for around ten years… all the while working on my own projects during evenings and weekends.

I started blogging and posting my personal work on Flickr around 2007, which eventually caught the attention of big design blogs such as Abduzeedo , which in turn, caught the eye of big brands. I started landing jobs for Toyota, MTV, and Google which allowed me to leave my job as a web designer and start the Signalnoise Studio full-time. I lived in Canada my entire life, until last month when I relocated to Newcastle upon Tyne in the United Kingdom. 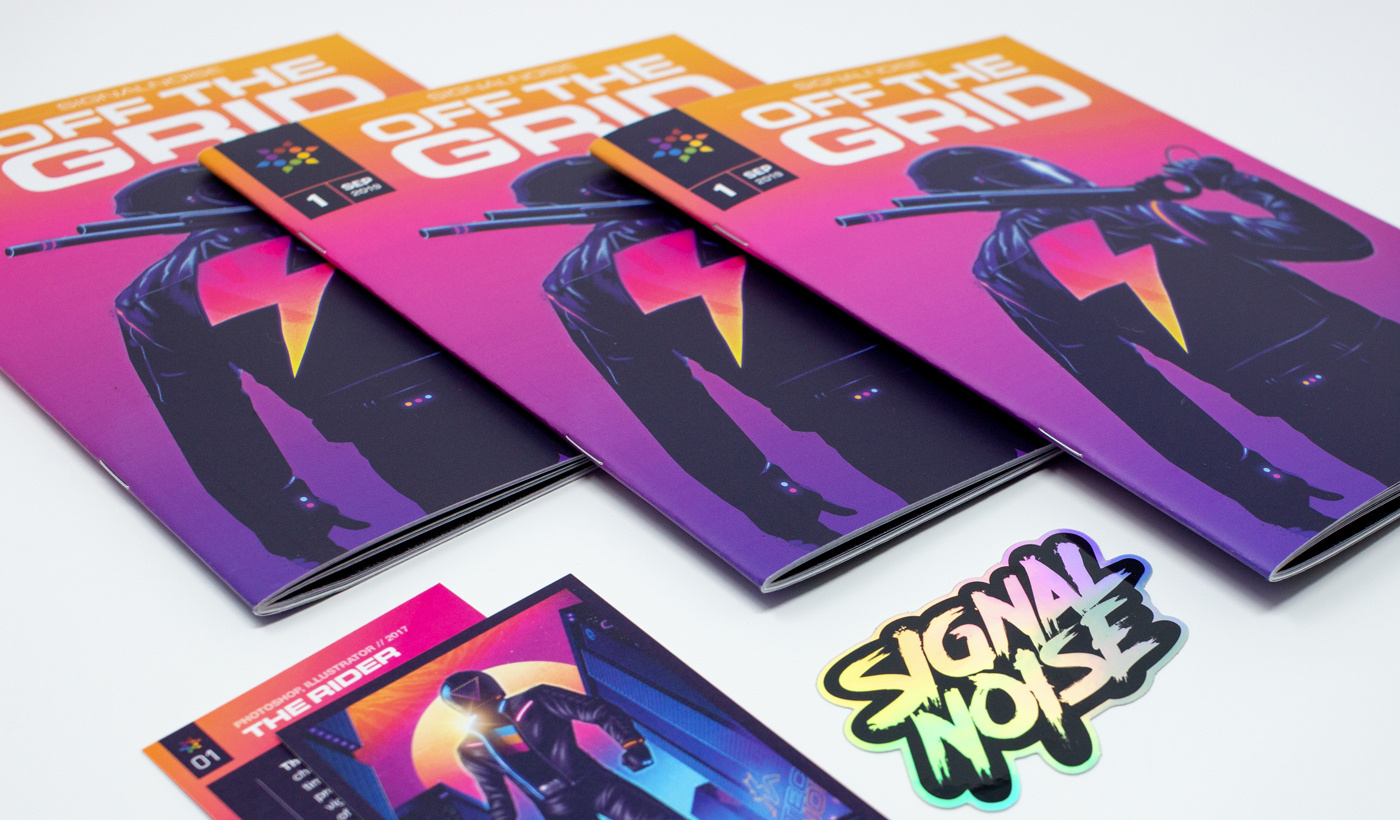 What projects are you currently working on?

I just wrapped up a very fun commission job for Hasbro and am currently working with a couple of galleries on some very cool movie posters. Unfortunately, I can’t offer more details on these gigs, which is killing me! Outside of that, I’m working hard on properly building the Signalnoise universe.

As of this interview, I’ve launched issue 1 of my new Signalnoise art zine called OFF THE GRID. The independent publication chronicles loads of my drawings, stories, and digital art from throughout my career — most of which have not seen print before now. Through my sketchbooks, childhood drawings, and digital back-ups I have an unbroken line of creative work reaching back to the late 80s, so it’s a real thrill to finally give parts of my archive a proper home in the pages of OFF THE GRID.

Getting my art physically into peoples’ hands is very important to me as I’ve become increasingly agitated that most of my work resides in pixels, hidden away on my computer or buried in social media posts. OFF THE GRID will only be available in print (no digital downloads). The zine makes this art tangible…it’s REAL.

What else are you passionate about outside design? How does it influence your work?

Outside of art and design, my passions lie in pop culture — specifically that of my childhood in the 1980s. I’ve been increasingly diving into historical rabbit holes, researching the origins and development of my favorite properties such as Masters of the Universe, Teenage Mutant Ninja Turtles, comic books, Nintendo games etc. It’s fascinating to see how these unique ideas were conceived, the conditions that made it possible, the people involved, and the trouble they encountered.

Outside of art and design, my passions lie in pop culture — specifically that of my childhood in the 1980s.

Seeing the story of how these people created original content is super inspiring, which feeds directly into my art — whether it’s drawing those characters or creating my own. An example of that is a little six-page comic I wrote and drew called StarKade, which is printed in issue #1 of OFF THE GRID. The characters are all based on “wrestlers” I created when I was ten-years-old, and it was very fun to build a universe for them to live in. I’ve been creating characters my entire life, so I’m sure the StarKade universe will continue to grow in the coming years.

Tell us your favorite piece of creative advice. Why does it resonate with you?

I have some dueling pieces of creative advice, so let me discuss one before the other. My first piece of advice is “never stop.” Finding our creative voice takes time, effort, and dedication. It’s easy to glance at someone’s portfolio and think they came out of the gate in perfect form, ready to make top-level work. It’s just not true. What we don’t see are the years that person toiled away, experimenting in form, and evolving their craft — a string of failures to achieve their “10,000 hours” of experience.

The more work we do, the better we get. We live in a social media world where people want instant recognition all the time. As a result, they hunt for shortcuts to replace spending time doing the necessary work. There is simply no replacement for experience over time, so my advice is to never stop creating. Never stop hunting for your creative voice. Do the goddamn work.

Never stop hunting for your creative voice. Do the goddamn work.

However, that advice is offset by the quest to “find your balance”. It’s sometimes very easy to sit in front of our computer until 3:00 am, but that’s going to wreck up the following day in a haze of yawning and blurred vision. Late nights actually rob us of time, not the other way around. I’d much rather do a 5-hour work session firing on all cylinders than a 10-hour session at half the effort. Simple math, man. Everyone has a different balance, so it’s up to the individual to figure out what that is. Getting away from screens to rest your eyes and get inspired goes a long way.

(Nerdy sidenote: I took up playing Magic: The Gathering with my friends… a perfect way to get away from the computer, be social, and have fun.)

Who’s another Dribbble designer you admire that you’d like to shout-out?

I’m still getting my footing in the Dribbble scene, and it’s been wonderful to explore a new creative space. I’ve discovered a lot of awesome illustrators and designers, but the work of Mercedes Bazan (Mechi) really jumped out. I absolutely love her ability to mix illustration, pattern, bold color, and typography — a healthy mix of influences, resulting in a style I’m very much envious of and enamored with. I’d definitely buy her comic book if she ever created one.

Do you have any events, speaking gigs, merch, workshops, classes, or products you’d like to shout-out?

Hell yeah! I’ll be taking the stage alongside my brother-in-arms Gav Strange at OFFF Barcelona 2020  this coming April. We’ll be presenting our new Hustlemania talk, which will no doubt be full of color, laughs, creativity, and rock n’ roll. I’ll also be speaking at a local Dribbble Meetup here in Newcastle sometime in October. Details are still forthcoming on that one.

On top of that, I’m looking to expand the Signalnoise universe with a new YouTube channel. It’s in its infancy at the moment, but I have some really fun creative videos and live sessions planned for the next while, including some hyperlapse drawing sessions, in-depth process stuff, live Q&A, and some general nerding about pop culture of the past.

Last but not least, issue 1 of my zine OFF THE GRID is available now.